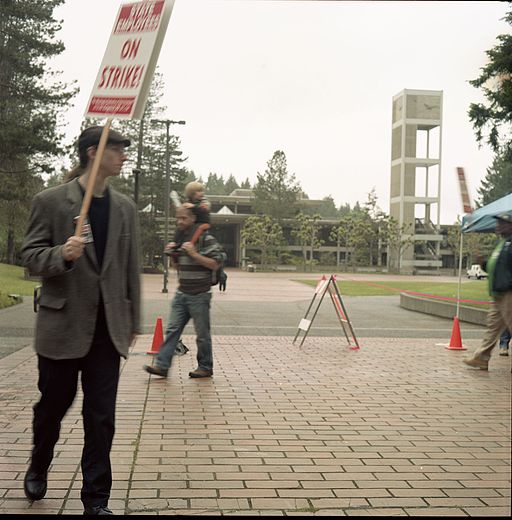 Evergreen State College hosts an annual event called a “Day of Absence” where, traditionally, minority students and faculty step away from the campus for the day to show just how significant their impact is. Additionally, white students attend workshops on racism.

This year, the school apparently thought it would just be a hoot to change things up and just kick all the white folks off campus instead. Biology professor Bret Weinstein, however, took issue with the event.

Now, students are calling for his head:

Students at Evergreen State College in Olympia, who filmed their exploits and posted the videos on social media, have occupied and barricaded the library, shouting down anyone who disagrees with them or shows insufficient passion for racial justice.

Biology professor Bret Weinstein was berated by dozens of students outside of his classroom Tuesday morning for refusing to participate in an event in which white people were invited to leave campus for a day. Now, he says police have told him to hold his classes off campus due to safety concerns.

Things are “out of control at Evergreen,” he said.

“Police told me protesters stopped cars yesterday, demanding information about occupants,” Mr. Weinstein told The Washington Times. “They believe I was being sought. It appears that the campus has been under the effective control of protesters since 9:30 a.m. Tuesday. Police are on lockdown, hamstrung by the college administration. Students, staff and faculty are not safe.”

A student interviewed denies any knowledge of Weinstein being specifically sought.

Weinstein’s sin is simply thinking that asking white folks to leave the campus was very different than minorities choosing to remove themselves from campus. He has a point. It appears that the original intent of this event is to show just how important minorities are to the proper functioning of the school. So why will demanding 66.7 percent of the student body, as well as Lord only knows how many faculty and staff, accomplish that same purpose?

Weinstein took issue with the change in an email, which led to him being confronted by students who refused to listen to the professor:

When the professor tells the students he will listen to them if they listen to him, one student responds, “We don’t care what terms you want to speak on. This is not about you. We are not speaking on terms — on terms of white privilege. This is not a discussion. You have lost that one.”

Another protester asks the professor whether he believes “black students in sciences are targeted.”

After asking for a clarification, Mr. Weinstein says, “I do not believe that anybody on our faculty, with intent, specially targets students of color.”

That remark prompts shrieks of outrage.

Way to keep those lines of communication open, kids. Way to go

ABOUT US
Right Side News is your online newspaper, publishing accurate information about threats against Western civilization. Right Side News stands out among news sites, offering the right news from sources you can trust. Find out what the real news is while there is still time to make a difference in your home, your community and your nation.
Contact us: editor@rightsidenewsdotcom.wpcomstaging.com
FOLLOW US
Copyright © 2007 - 2023 Right Side Network, LLC